Winter is a wonderful time of year for viewing.  Winter brings air with low absolute humidity and great deep space targets.  If you’re into astrophotography, the colder temps will help keep the noise down in long exposures of your digital camera.  The down side is that cold winter air tries its best to break your will to enjoy the skies.

In the northern hemisphere, winter brings some of my favorite visual and photo deep space objects into view.  Before Christmas, Pleiades (Seven Sisters, Messier 45) is overhead at sunset.  With even modest binoculars you can clearly break out more than just seven sisters.  A low power telescope and non-city skies reveals a hint of nebulosity connecting the cluster.  Sixty second photos start to break out the Pleiades’ striking cotton candy-like blue nebulosity.

The #1 beginner astrophotography target in the winter has to be the Orion Nebula (M42).  The nebula’s intricate details bring pro photographers back year after year.  In January and February, M42 is high overhead at sunset.  It’s so bright that even here in the Las Vegas suburbs you can see its blur of nebulosity with unaided eyes.  It’s brightness definitely lends itself to budding astronomers and astrophotographers alike.  The triangulum region and nebula is nearly as striking the first time you see them as Saturn’s rings.  Beginner astrophotographers can test their polar alignment and focusing skills by taking simple 30 second photos of the nebula.  Shooting prime through most telescopes at ISO1600 and 30 seconds, much of the nebula – including its color – is visible.  Over a 30 second exposure, most equatorial or wedge-mounted fork mounts can get by at least half the time without any manual or autoguiding.  The photo below shows the Orion Nebula at, to the right, its companion the Running Man Nebula.  It was taken by a Canon 5D Mark II through a Celestron 80ED.  It’s a combination of 5 unguided shots at 30 seconds and ISO1600 and 5 unguided shots at 30 seconds and ISO3200 (with processing in Nebulosity and Photoshop). 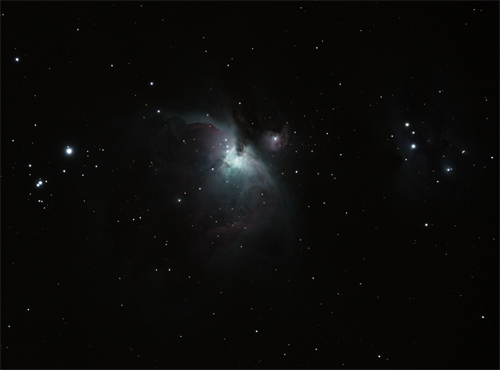 A great, but more challenging target for later in the winter is the Rosette Nebula (NGC 2244).  Its brightness is spread across a huge area over a degree across.  The star cluster near its center lets you know you’ve found it.  Multiple autoguided exposures of 5 minutes or more are best to bring out all of the Rosette’s size and gorgeous detail.

This winter (2010) Mars is also a good show.  While not as big in your eyepiece as four years ago, the red planet is still worth a place on your winter viewing list.  Don’t procrastinate though.  It’ll retreat to just a spec before too long.

So, bundle up & enjoy the winter skies.  Share your eyepiece and photos with friends and family.  Find a target that “wows” you and introduce children & adults to the stars.