I haven’t done any official research, but my guess is amateur astronomy buffs spend most of their astronomy time in their backyards.  Home-based astronomy is great because it’s “right there.”  It’s easy to set up your telescope and view the planets, moon, and maybe even some darker deep space objects like galaxies and nebulae.

One of the bad parts about backyard astronomy is light pollution.  NASA recently published images of the entire world’s “light map” taken at night from space.  If you live in the US, odds are you live in one of the bright areas of the image below. 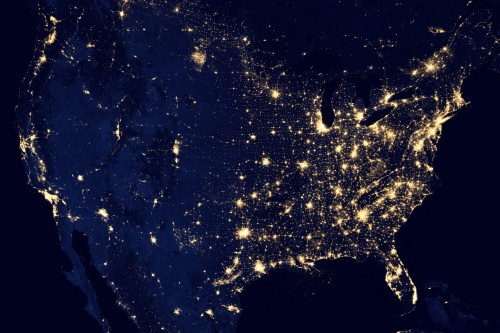 In general, those bright spots are concentrations of people.  For some crazy reason, people like things like street lights.  Those street lights wreck havoc on the darkness of the night sky.  When I was young, we lived outside town far enough that I spent many mornings admiring the stars while waiting for the school bus.  I used to imagine what each star was like and wondered if anyone else was out there.  In many cities, only a few stars are ever visible to the naked eye.  That definitely makes it tough to be inspired by the night sky.

Just recently, my neighborhood replaced all of the halogen street lights with LEDs.  Their goal was to save money on electricity.  A great side benefit was the light pollution near my home dropped quite a bit.  I still have the glowing fireball of Las Vegas to the north of my home, but the skies are fairly dark to the south.

I have to admit that, despite living in my home for over 3 years, I’ve never done any astrophotography from my backyard.  I assumed that because I lived in a big town, it wouldn’t be worth the effort.  Turns out, I was wrong.

Two nights ago I dragged out the telescope, cameras, laptop, tables, power cords, and piles of USB cables.  I did a quick polar alignment using my Celestron CGEM’s built-in polar star alignment routine.  I centered the scope on the Orion Nebula and started shooting photos.  The skies were dark enough that my camera was able to capture up to 5 minute exposures without being too blown out from the light pollution.

Over a couple hours, I took a total of 25 shots of the Orion Nebula ranging from 30 seconds to 5 minutes each.  I crunched all the data yesterday and ended up with a backyard astrophoto that I’m happy with.  Here’s the result (click on the photo to see the full sized version).

So, what do you think?  I think you should go outside and look at the stars.  Find Orion.  It’s just south of “straight up” at about 8pm.  Try to find the Orion Nebula.  It’s the jewel in Orion’s sword.  There it is.