Messier 51 – The Whirlpool Galaxy Under a Full Moon

When doing astrophotography, I’ve always dodged the moon like the plague.  Since not imaging when the moon is up severely limits how much shooting I can do, I decided to see what I could do with a full moon high in the sky.  I was pleased to find out that as long as you can keep the direct moon light out of the scope and you aren’t imaging close to the moon, you can actually get astrophotos when the moon is up.

I did an M51 imaging run starting at 2am local time using Telescope 20 at iTelescope.net’s New Mexico Skies observatory.  The telescope is a Takahashi FSQ-106 with an SBIG ST-8300C camera.  I shot 12x 300second images.  The seeing was reported as around 2 arc-sec.

I watched a few other people imaging that night and scopes that did not have solid side tubes (like the CDK truss scopes) didn’t do well with the moon.  Refractors with dew shields seemed to do fine though. The moon was at about 99% illumination just over 60 degrees away from M51 during my imaging run.

I combined the images using Nebulosity’s Normalize Images & Standard Deviation 1.5.  From there, I kicked around levels, curves, smart sharpening (bright areas), Gaussian blur (dim, non-star areas), and Star Spikes Pro in Photoshop.  I cropped it to the middle 1920×1080 pixels and came up with this… 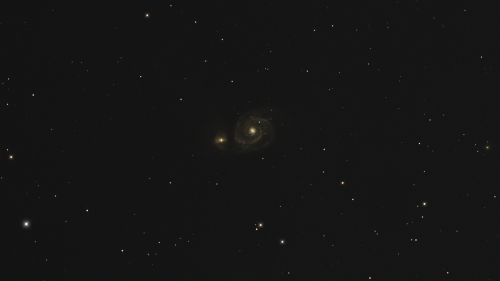 Click the photo to see the full sized version.

For my first astrophoto on a full moon night, I’m really happy with it.  For now, I’ll stick with a “60 degrees off” rule and greatly expand the number of nights I can image.  There’s at least one “hmmm” I still have to figure out – how does light pollution impact this?  Imaging from in town will likely give completely different results than imaging from a dark sky site.  Gotta figure that out…  more astrophotography!